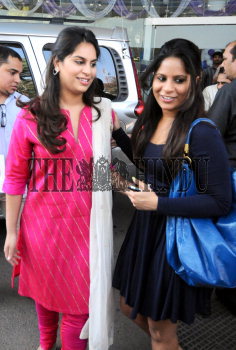 Caption : HYDERABAD, 04/02/2012: Actor Ram Charan Taj's fiancťe Apollo heiress Upasana Kamineni, greeted by her sister Anushpala after releasing 'Apollo Life' the Oncology Issue, a special Healthcare magazine on the occasion of the World Cancer Day at Apollo Cancer Hospital in Hyderabad on February 04, 2012. Breast and cervix cancer are most common among women and men suffer from neck, throat and prostate cancer. Cancer has climbed up in the Indian graph due to rapid lifestyle changes adding nearly a million new cases every year and 75 percent of cancer can be cured if detected early according to Oncologist. Photo: Mohammed Yousuf