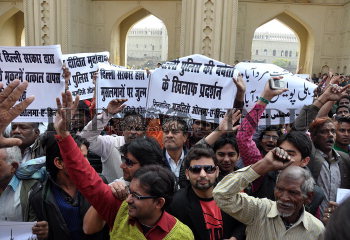 Caption : LUCKNOW, 03/02/2012: Shia muslims demonstrating outside the Asafi Imambara, protesting.against Congress, BJP and Delhi Goverment for the brutal lathicharge and demolition of a Karbala at Jorabagh in Delhi during Chellum, in Lucknow on February 03, 2012. Photo: Subir Roy