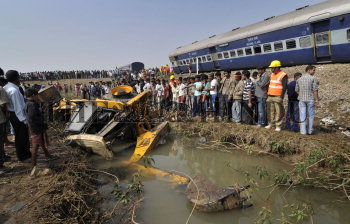 Caption : GUWAHATI, 03/02/2012: Villagers looking at the ill-fated earthmover which was hit by the Bongaigaon-Guwahati Chilarai Passenger train in Sathisarapa village in the outskirts of Guwahati on February 03, 2012. Three persons were killed and over 50 injured in the collision. The engine and five bogies of the passenger train got derailed, wheels of some of the derailed coaches were broken and a portion of the railway track too was damaged in the accident. Photo: Ritu Raj Konwar