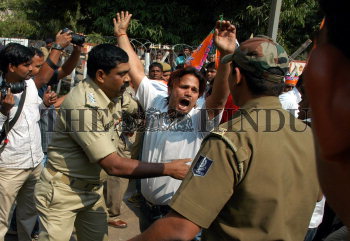 Caption : BHUBANESWAR, 01/02/2012: Activists of BJP being arrested during their protest against Biju Janata Dal Government in Bhubaneswar on February 01, 2012. Photo: Ashoke Chakrabarty