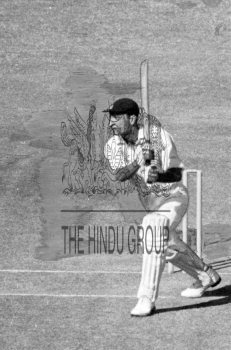 Caption : BOMBAY, 04/12/1950: "TESTS", COMMONWEALTH TEAM IN INDIA: Umrigar, who was concerned in a record partnership for the fourth wicket with Hazare in India's second innings, is seen making a drive off Tribe, on the fourth day of the Second "Test" between India and Commonwealth XI, at Brabourne Stadium in Bombay on December 04, 1950. At close of play, he was unbeaten with 124. Photo: The Hindu Archives