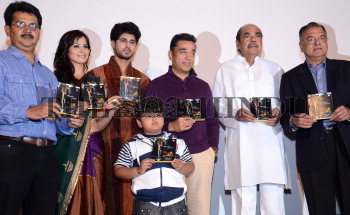 Caption : HYDERABAD, 29/01/2012: Actor Kamalhaasan at the audio release of 'Rushi', a film made by Ramesh Prasad of the prestigious Prasad Productions after a gap of over three decades. Also seen at the function in Hyderabad on January 29, 2012, are producer D. Rama Naidu, director Raj Madiraju, the hero Arvind, heroine Supriya and the trio who scored the music Snigdha, Raj and Chandran. Photo: Nagara Gopal