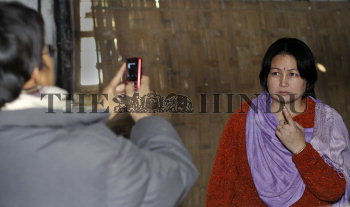 Caption : MANIPUR, 28/01/2012: An election official takes picture of a Manipuri woman before casting her vote in Imphal city capital of Manipur State. In a first such move, the Election Commission has decided to photograph each voter in Manipur to avoid rigging in the Assembly Elections. People are coming out in large numbers to cast their vote, in Manipur since morning. Altogether 17,41,581 voters would exercise their adult franchise to decide the fate of 279 candidates contesting in the 60 Assembly Constituencies of Manipur. Photo: Ritu Raj Konwar