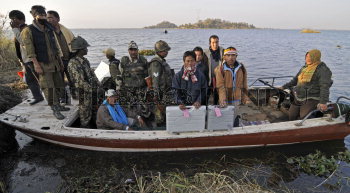 Caption : MANIPUR, 27-01-2012: Electronic Voting Machines (EVM) are being taken on boat by the polling officials to Karang island polling station which is situated in the middle of Lok Tak Lake in Thanga constituency on the eve of the Manipur Assembly election in Bishnupur district of Manipur on Friday, January 27, 2012. Voting will take place for sixty Manipur assembly seats on January 28, 2012. Around 2,357 polling stations in the state have been announced, out of which only 160 are deemed normal and the rest as hyper-sensitive and sensitive spots. Three hundred and fifty companies (comprising approximately 3,500 personnel) of security personnel, including 280 companies of para-military forces are set to provide security cover during the elections. Photo:Ritu Raj Konwar