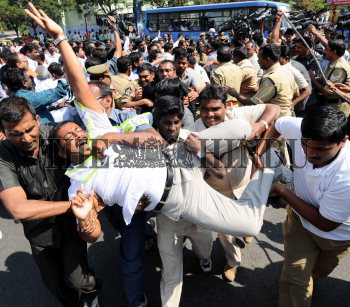 Caption : HYDERABAD, 26/01/2012:Pro-Telangana activists bundled into police van after they wanted to takeout protest rally demanding the installation of the Dr.Ambedkar statue in the Andhra Pradesh Legislative Assembly premise, in Hyderabad on January 26, 2012. Caste tension continued to prevail in the Konaseema region of the East Godavari district against the desecration of the statues of the Dalit icon DrBR.Ambedkar at four places in Amalapuram assembly constituencies. Photo:Mohammed Yousuf