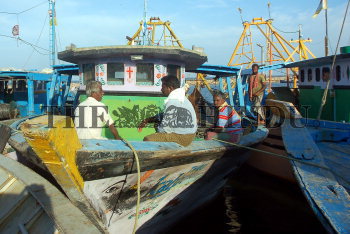 Caption : TUTICORIN, 24/01/2012: Two mechanized fishing boats from Kanyakumari district seized by Tuticorin mechanized boat fishermen in the early hours of January 24, 2012: Since the fishermen from the neighbouring coastal district had allegedly trespassed into Tuticorin coast after staying overnight at sea, the Tuticorin fishermen got agitated and seized the boats. Photo: N. Rajesh