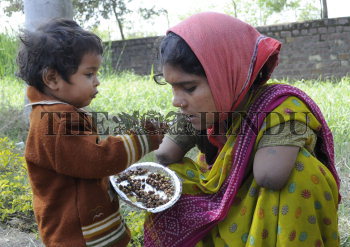 Caption : BHOPAL, 20/01/2012: Children's right: Two-year old child Vaishnavi offering food to her handicaped mother Sangeeta, during 2nd National Convention on 'Children's Right to Food' in Bhopal on January 20, 2012. Sangeeta, a construction labour lost her both hands due to accident during construction of a building at Multai township in Madhya Pradesh on year 2001. She got married to Suresh Behare knowing the fact that Sangeeta is handicapped. The couple has asked for help from Disstrict Government to Chief Minister of the state but it was of no use. photo by A_M_Faruqui (20_01_2012)