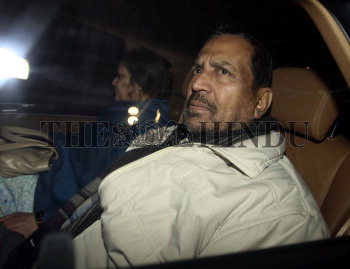 Caption : NEW DELHI, 19/01/2012: Suresh Kalmadi, former chairman, Commonwealth Games Organising Committee, at his residence in New Delhi after his release on bail by the Delhi High Court in one CWG scam case, on January 19, 2012. He was in prison for nearly nine months. Photo: Sushil Kumar Verma