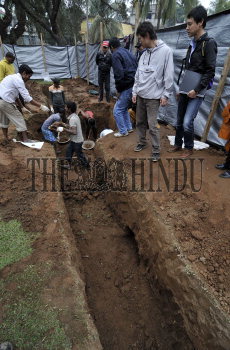 Caption : GUWHATI, 19/01/2012: Deputy Director of the Office of Foreign Affairs and Planning Division of War Victims' Relief, Japan, Ken Miyashita (R) along with the technical expert Ministry of Health, Labour and Welfare, Japan, Masahiro Takeda (L) supervising the digging operation for the second day of the eleven Japanese soldier?s graveyards in search of their remains at the Nabagraha War Cemetery in Guwahati on January 19, 2012. Some samples were collected from the graves but nothing significant had been recovered so far. The Japanese delegation was bearing the expenses for digging the graves while the Assam government had extended all other assistance. The Japanese delegation would take samples, if recovered, either in a sterilised form or after burning them. The Guwahati cemetery has 521 graves, including 316 known and 18 unknown graves of soldiers from the United Kingdom, 136 known and seven unknown Indian soldiers, four from Canada, four from South Africa, one from New Zealand, two graves of soldiers whose nationality is unknown, 11 graves of Japanese soldiers and 24 graves of Chinese Army soldiers Photo: Ritu Raj Konwar