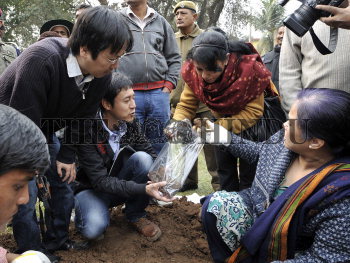 Caption : GUWHATI, 18/01/2012: Japanese officials having a close look of the items recovered from the digging operation of the eleven Japanese soldiers' graveyards at the Nabagraha War Cemetery in Guwahati on January 18, 2012. A three-member Japanese team has arrived here to initiate the formalities for taking back the remains of eleven Japanese soldiers killed in the Assam sector of the China-Burma-India theatre of World War II and buried in the war cemetery. The Japanese government is exhuming and taking away the remains of eleven of its soldiers buried in the Guwahati War Cemetery for more than six decades now. The north-east has four cemeteries maintained by the Commonwealth War Graves Commission (CWGC) at Guwahati, Kohima, Digboi and Imphal. Photo: Ritu Raj Konwar