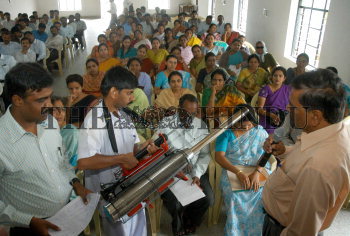 Caption : MYSORE, 27/06/2007: An health worker giving a demonstration on the use of fogging machine for tackling mosquito breeding, at a workshop organised for the medical officers of the district, in the wake of suspected cases of Chikungunya, in Mysore on June 27, 2007. District Health Officer Rangaswamy is also seen. Photo: M.A. Sriram