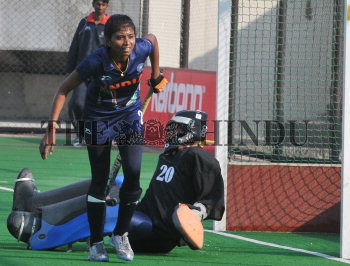 Caption : New Delhi, 15/01/2012: India's SOUNDARYA celebrates after scoring a goal against Azerbaijan during the first hockey Test match of the India-Azerbaijan Test Series (women) at the National Stadium in New Delhi on January 15, 2012. Photo: R.V. Moorthy