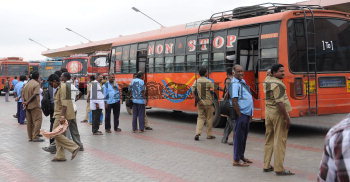 Caption : MADURAI, 11/01/2012: On January 11, 2012, many commuters were STRANDED at the integrated bus stand, Maatuthavani in Madurai. Passengers are inquiring with a police officer on the likely departure of buses bound for cities like Ramanathapuram, Tuticorin, Paramakudi and Ettayapuram. Passengers from Chennai, bound for Tuticorin were informed in the morning that the bus would not proceed beyond Madurai and were given refunds by the conductor. Women carrying children were helpless as the situation remained tense in Tuticorin till evening. A Dalit leader was hacked to death in Dindigul on Tuesday night following which buses were targeted and as a precaution, the authorities had suspended the services. Photo: R. Ashok