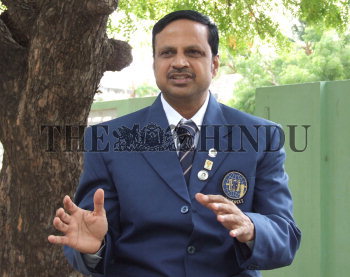 Caption : TIRUCHI, 26/06/2007: M. Rajamani, during an interaction in Tiruchi on June 26, 2007. M. Rajamani has cleared the category-I international referee examination and has become part of the elite group of qualified international weightlifting referees. As per the International Weightlifting Federation, a category-I referee is eligible to officiate national championships and international events of all levels including, World Championships, Olympics and also serves as a member of an international jury. Rajamani, who works as the Divisional Engineer in the Highways Department, Tiruchi, is the first State Government officer to achieve the feat. A consistent performer during his career as a lifter, the four silver medals from 1978-81 in the inter-State weightlifting competitions is proof enough. This apart he was also a champion in the all-India civil services meet from 1984-94. Photo: R. Ashok