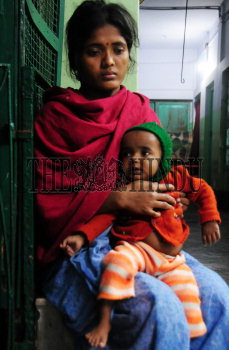 Caption : KOLKATA, 10/01/2012: Ashalata Das along with her one year three month old baby Rajesh at a rehabilitation centre of CINI-Child in Need Institute near Kolkata on January 10, 2012. Ashalata hails from a poor family of four people. Her husband is a agriculture labour, who manages to earn hardly Rs.1200 per month. The mother of two babies got married at the age of sixteen. After birth Rajesh suffered from Jaundice and malnutrition and the poor family could not afford to overcome the situation, which resulted havoc for him. Today Rajesh cannot sit as his neck and spine are not strong enough to hold him. The live at Dhola in South 24 Parganas district of West Bengal, which is around 65 km away from Kolkata and around 20 km away from a Government Hospital in Diamond Harbour. Photo: Arunangsu Roy Chowdhury