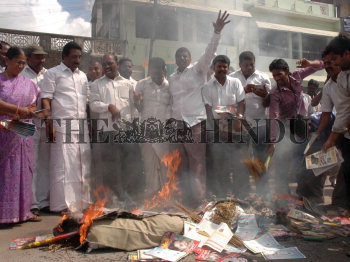 Caption : KANCHEEPURAM, 07/01/2012: AIADMK cadres burning the effigy of Nakkheeran editor Gopal and copies of the magazine in Kancheepuram on January 07, 2012. The Tamil bi-weekly magazine had carried a report describing Jayalalithaa as a beef-eater. Photo: B. Jothi Ramalingam