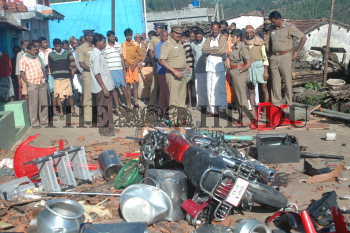 Caption : OOTY, 06/01/2012: Police conducting an inquiry at B. Manihatty near Udhagamandalam on January 06, 2012. Opposition to the proposal to build a church at B. Manihatty, a Badaga village, took a violent turn, with a group attacking the residence of Moorthy, who planned to build the place of worship. Photo: M. Sathyamoorthy