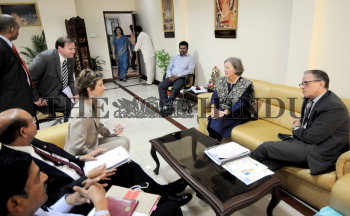 Caption : HYDERABAD, 06/01/2012: The Minister for Major Industries, Sugar, Commerce and Export Promotion J. Geeta Reddy entering her chambers late by 20 minute unmindful of the Export-Import Bank of the United States Chairman and President Fred P. Hochberg who is one of the highest ranking business leaders in the Obama administration with accompanied Consulate General Katenia Dhanani waited for her in Hyderabad on January 06, 2012. US EXIM bank identified India as one of its key markets in the world and if the current trend continues will become its largest customer within the next 12 to 18 months and second largest in guarantees and loans extended by the Bank worth seven billion dollars and stands behind Mexico, which receives financing of around $8.5 billion. Photo:Mohammed Yousuf