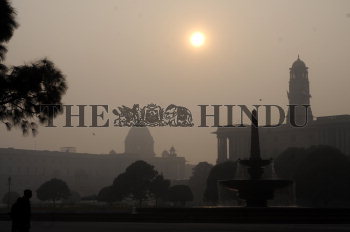 Caption : NEW DELHI, 05/01/2012: National Capital was blinded by dense FOG even in the evening, shadowing the sun in New Delhi on January 05, 2012. Due to dense FOG, visibility falling to near zero level, slowing down traffic on roads and disrupting air and rail traffic. Photo: Rajeev Bhatt