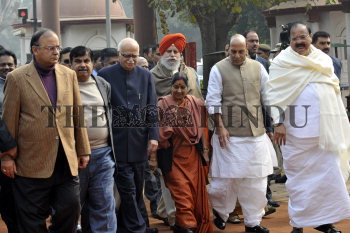 Caption : NEW DELHI, 05/01/2012: BJP senior leader L.K. Advani with party MPs marching to the Rashtrapati Bhavan to submit a memorandum to President Pratibha Patil in connection with adjournment of Parliament on Lokpal and Lokayukta Bill 2011, in New Delhi on January 05, 2012. Photo: V. Sudershan