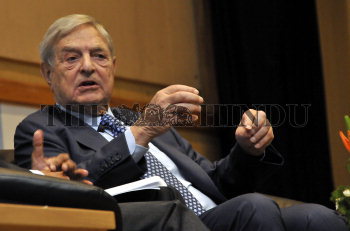 Caption : HYDERABAD (AP) -05-01-2012 - BL/ REPORT: AMIT MITRA -- Mr. George Soros, the Hungarian-American business magnate,investor, philosopher, and philanthropist speaking on a wide range of global issues at the Indian School of Business in Hyderabad on Thursday . Mr. Sorus is the chairman of Soros Fund Management. Soros supports progressive-liberal causes. He is known as "The Man Who Broke the Bank of England" because of his US$1 billion in investment profits during the 1992 Black Wednesday . PHOTO: P.V.SIVAKUMAR .