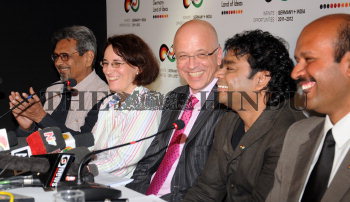 Caption : CHENNAI, 04-01-2012: Film historian Amrit Gangar, Director of Goethe-Institute / Max Mueller Bhavan, Mumbai, Marla Stukenberg, acting Ambassador at the German Embassy Cord Meier-Klodt. Music composer A.R.Rahman and Lap India, Managing Director S.P.Kamisetty at a press conference to announce In a first of its kind initiatives, the 100-year-old German Film Orchestra Babelsburg will play select compositions by the music maestro. The event is likely to be repeated in Germany sometime next year titled ?Classic Incantations' ? the concert tour will see the musical alliance of the 100-member orchestra Babelsburg and students of the KM Music Conservatory, Chennai, and will feature orchestral sweeps composed by Rahman ? from Roja to Robot. Photo: SR.Raghunathan