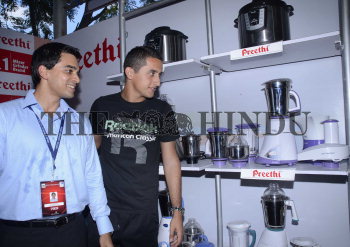 Caption : CHENNAI, 04/01/2012: Spanish tennis player Nicolas Almagro (right) looks at Preethi products, after the launch of Lavender Pro and Power One, at the SDAT Stadium in Nungambakkam during the Aircel Chennai Open 2012 on January 04, 2012. T.T. Siddarthi, Director of Special Projects, Preethi Kitchen Appliances, is seen next to him. Photo: S.S. Kumar