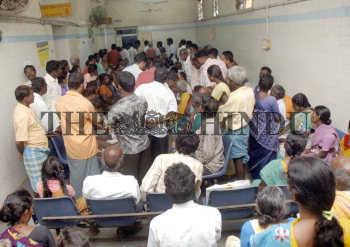 Caption : CHENNAI, 04/01/2012: Patients waiting in the O.P ward as doctors at Rajiv Gandhi Government Hospital went on a strike to protest the murder of anaesthetist Dr. T. Sethulakshmi by an autorickshaw driver in Tuticorin on January 03, after his pregnant wife who was admitted in a serious condition died before she could be shifted to a private hospital. Photo: M. Karunakaran