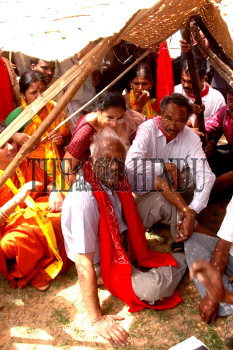 A. B. BARDHAN SQUATTING IN A MAKESHIFT HUT

Caption : HYDERABAD-25/06/2007:- National General Secretary of Communist Party of India, A. B. Bardhan squatting in a makeshift hut in Keesaragutta mandal of Ranga Reddy district of Andhra Pradesh after the party's activists illegally took possession of the vacant government land as part of party's struggle demanding land to landless poor. About 75 lakh acres of land is in the hand of land grabbers and Bardhan demanded that the government hand over the land to the poor for agricultural purposes. Photo: Mohammed_Yousuf