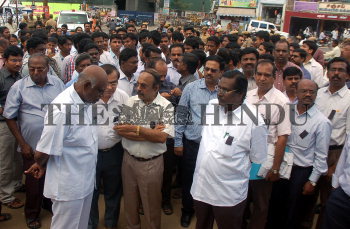 Caption : TUTICORIN, 03/01/2012: Healthcare professionals in Tuticorin staging a protest in front of South Police station on January 04, 2012, in protest against murder of anaesthetist, T. Sethulakshmi, by an armed autorickshaw driver in Tuticorin on January 03, after his pregnant wife, who was admitted to the hospital in a ?serious condition?, died before she could be taken to a private hospital. Photo: N. Rajesh