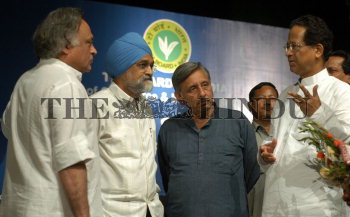 Caption : GUWAHATI, 25/06/2007: Deputy Chairman of Planning Commission Montek Singh Ahluwalia, Union Minister of State for Commerce Jairam Ramesh and DONNER Minister Mani Shankar Aiyar having a word with Assam Chief Minister Tarun Gogoi, at the launching of the Special Purpose Tea Fund (SPTIF) loans for Assam in Guwahati on June 25, 2007. The SPTIF will cover 1000 tea gardens and will generate additional employment at the rate of 22 million person days per year. Under SPTIF, tea bushes over 50 years old will be replanted and rejuvenated in two lakh hectares of land in two years in Assam. The Ministry of Commerce and Industry, Government of India will launch SPTIF schemes in West Bengal on June 29th and in the first week of July in South India. Assam produces 52% of the total production of Indian tea. Photo: Ritu Raj Konwar