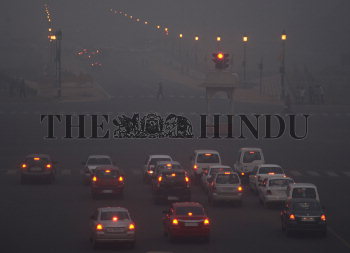 Caption : NEW DELHI, 02/01/2012:Commuters move on after office hours, as Vijay CHOWK is surrounded with dense fog, many trains in North India, running late due to poor visibility at night and early hours, in New Delhi on January 01, 2012. Photo: Shanker Chakravarty