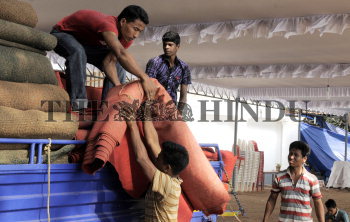 Caption : Despite failure in adapting to the local milieu, labourers from Northern and North-Eastern India have been coming to Kerala in large numbers, mostly for manual works. However, the industry is now worried as the flow has dwindled slightly following the betterment of living conditions in these States. A scene from Kochi city. Photo: K_K_Mustafah 02/01/2012