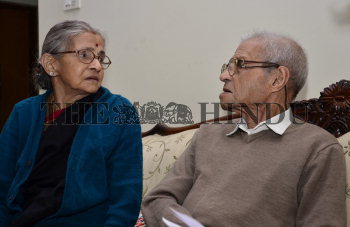 Caption : BANGALORE, 28/12/2011: This former forest officer played a role in the liberation of Goa. A bamboo park in Marcela has been named after Ganesh Mavinkurve in recognition of his contribution. The Indian Army marched into Panaji and declared the liberation of Goa from Portuguese rule on December 19, 1961, but what is often forgotten is the role played by those who made the march possible. It is only now, 50 years after the liberation, that the role played by former forest officer Ganesh Mavinkurve has been highlighted, with the naming of a bamboo park in Marcela, Goa, after him. Photo:K.Gopinathan