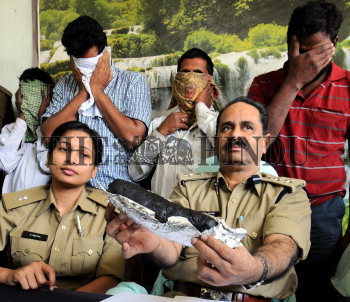 Caption : HYDERABAD, 28/12/2011: DEPUTY COMMISSIONER of Prohibition and Excise M.M. Faruqui and S. Smitha showing huge quantity of 'Opium' ( 'Afeem' local name ) seized from the four persons includes APSP constables and a lawyer was caught red handed for possessing huge quantity of narcotics at Necklace road railway station in Hyderabad on December 28, 2011. This the first time such huge quantity of 'Afeem' or Opium was seized ahead of New Year eve in twin cities is approx 25 lakhs in gray market, according to officials press note. Photo:Mohammed Yousuf