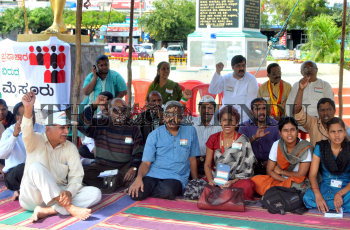 Caption : MYSORE, 27/12/2011: Members of Mysore Against Corruption staging a demonstration at Gandhi Square in Mysore on December 27, 2011, in support of anti-corruption crusader Anna Hazare who has launched a fast in Mumbai demanding a strong Lokpal Bill. Photo: M.A. Sriram