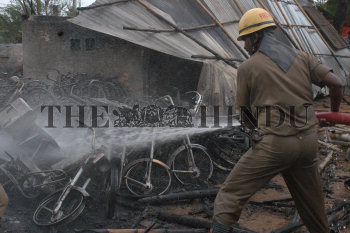 Caption : TIRUCHI 23/06/2007: A fire fighter spraying water to put out fire which broke out in a cycle stand near Manjathidal railway station in Tiruchi on June 23, 2007. Photo: M. Moorthy