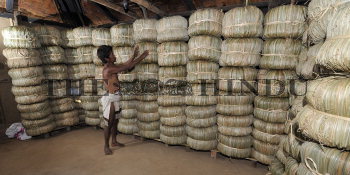 Caption : KARBI ANGLONG?26-12-2011 A TIWA tribesman having a look of his paddy bags which are stored in his house in Bormarjong village, Karbi Anglong district of Assam on Monday, 26 December 2011.Harvested paddies are put inside these baskets and kept for future use. The capacity of each paddy basket is approximately about fifteen kg. Cooperative and collective endeavour is a strongly developed feature of the economic activities of the TIWAs especially in the post-harvest agricultural work. There is a mutual dependence among the people here, who assist their fellow village men and women in preserving the grains for future consumption. As the TIWAs do not build granaries, they preserve the grains inside bundles of straw called ?Maiphur? which is tightly secured by bamboo strips. Harvesting season has almost come to an end in Assam. PHOTO: RITU_RAJ_KONWAR