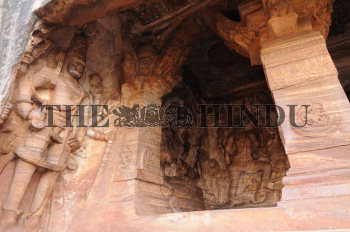 Caption : BANGALORE, 25/12/2011: The rock-cut Badami Cave Temples, capital of the Chalukyas, who ruled much of Karnataka and Andhra Pradesh between the 6th and 8th centuries. Badami, formerly known as Vatapi, in Bagalkot district of Karnataka, India. It is located in a ravine at the foot of a rugged, red sandstone outcrop that surrounds Agastya lake. Photo: K. Murali Kumar