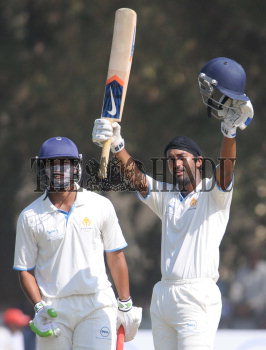 Caption : SHIMOGA : 24/12/2011. Karnataka's Amit Verma (right) acknowledges the cheers of the crowd after scoring a century as Ganesh Satish looks on during the Ranji Trophy Elite Group 'A' cricket match between Karnataka and Uttar Pradesh at JNNCE ground in SHIMOGA on December 24, 2011. Photo: G.P. Sampath Kumar