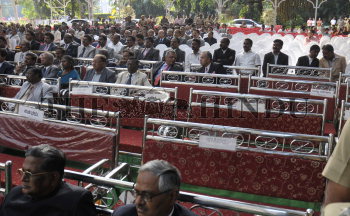 Caption : BANGALORE, 24/12/2011: Chief Minister and ministers of Karnataka government were absent during the swearing in ceremony of the new Chief Justice of the Karnataka High Court Vikramajit Sen at Raj Bhavan on December 24, 2011. Photo: K. Bhagya Prakash