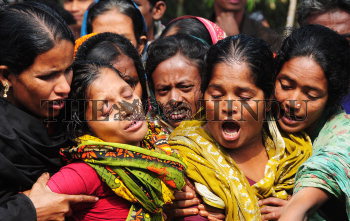 Caption : Kolkata: The family members and neighbourers of Sirajul Pailan, one among the victims of spurious liquor are in grief after seeing the dead body on Thursday morning at Paddyerhat at Sangrampur of South 24 parganas in West Bengal. Sangrampur is located near Mograrhat, around 45 km from Kolkata, is one among the villages that have faced the worst in spurious liquor tragedy, which so far claimed 120 lives from Tuesday. Most of the houses have at least one victim, who fell ill after drinking spurious liquor and later died. The daily-wage labourers, small vendors and rickshaw pullers, who generally go for the cheap country made liqour are the victims here. The air and sky of these villages are battered with endless cry from every house. The grief is rolling from one house to another. The process of burying the dead bodies is getting delayed due to the huge number of death. The poor family members are waiting with the dead bodies either at homes or nearby open places at the villages. Women and children looked helplessly scattered in the villages, while men are found busy helping the victim?s family. Photo: Arunangsu Roy Chowdhury December 15, 2011.