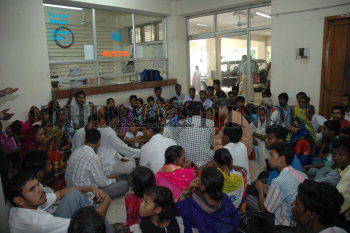 Caption : BHUBANESWAR, 22/06/2007: A large number of villagers, who would be the victims for POSCO integrated steel plant in coastal districts squatting at State Pollution Control Board office under the banner of Navnirman Samity to protest against issuing No Objection Certificate to POSCO by SPCB in Bhubaneswar on June 22, 2007. Photo: Ashoke Chakrabarty