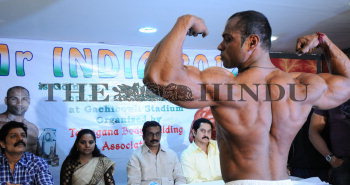 Caption : HYDERABAD: 22/12/2011: A body-builder strikes a pose in front of chief patron of Indian Bodybuilders Federation and Telangana Jagruthi founder Kavitha, actors Srihari and SUMAN, during the curtain raiser for bodybuilding competition titled ?Mr. India Contest 2012', a three-day event which will be conducted from January 20 to 22 under the aegis of Telangana Bodybuilding Association, in Hyderabad on December 22, 2011. Ms. Kavitha is trying to rope in actor John Abraham as the face of the competition. Photo: Mohd. Yousuf