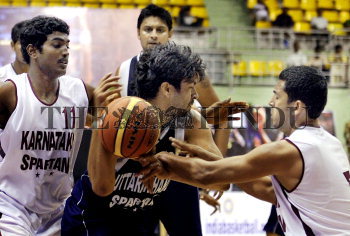 Caption : Chennai, 21-12-2011: Trideep Rai (blue) of Uttarakhand being tackled by Srinivasa Naik (right) of Karnataka during the men's pre-quarterfinal match between Karnataka and Uttarakhand in the 62nd Senior National basketball championships at the Nehru Indoor Stadium in Chennai on December 21, 2011. Photo: S.R. Raghunathan