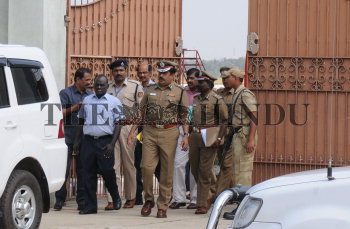 Caption : TIRUCHI, 20/12/2011: The Additional Director General of Police (Law and Order) S. George coming out of the airport on December 21, 2011, after reviewing the security arrangements to be made for the transit visit of Prime Minister Manmohan Singh at Tiruchi. Photo: M. Moorthy