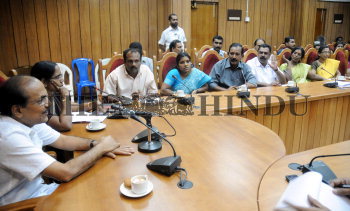 Caption : THIRUVANANTHAPURAM: 20/12/2011: Industries Minister P. K. Kunhalikutty and the Thiruvananthapuram Mayor K. Chandrika at a meeting called to discuss the Vilappilsala garbage treatment plant on December 20, 2011. The meetng was cancelled following objections from the representative of the Vilappil panchayat.........Photo:S.Gopakumar