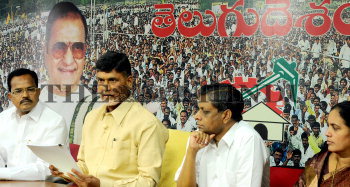 Caption : HYDERABAD. 20/12/2011: Telugu Desam Party president N. Chandrababu Naidu addressing a news conference held at NTR Bhavan where he demanded that the Andhra Pradesh Chief Minister should unearth the names of politician, excise, police officials and local media involved in multi-crore liquor scam in which unscrupulous traders marked up the retail prices, in Hyderabad on December 20, 2011. His party planned for a statewide agitation against the liquor syndicates. Photo: Mohammed Yousuf