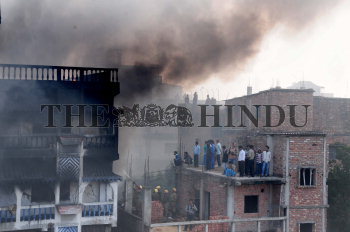 Caption : Kolkata: The building of the rubber sandle factory, which was fully gutted due to a havock fire broke out on Monday night in Kolkata. The factory is located at the thickly populated Topsia area of the city. The fire spread over the three storied building and was out of control due to the huge storage of rubber materials and different combustible chemicals. More than 25 fire engines after eight hours struggle, the firemen were able to have a grip on the fire. Thankfully no casualty was reported. Photo: Arunangsu Roy Chowdhury December 20, 2011.