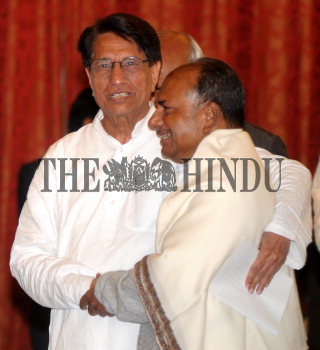 Caption : NEW DELHI, 16/12/2011: Rashtriya Lok Dal (RLD) Chief Ajit Singh greeted by A K Antony at Rashtrapati Bhavan, he was sworn in as Union Cabinet Minister in a minor expansion of the Council of Ministers, a week after his party formally joined the UPA in New Delhi, on December 16, 2011. Photo: V. V. Krishnan